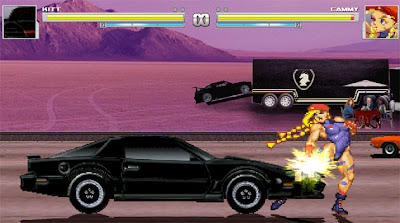 This is a completely original character of the Knight Industries Two Thousand... or K.I.T.T if you prefer.
I know this is a car, and they haven't been all that popular within MUGEN before, but I really hope you enjoy this character. This is NOT a sprite swap, nor does this character act in anyway like the Delorean I previously released, or whatever the character was I used to sprite swap that original car with.

Kitt can move back and forward, but cannot jump, as that would be stupid for a car, but he can shoot a laser beam from the light on his fender, attack you with his grappling hook, or just run you down with Super Pursuit Mode rams... if thats not enough, try the Turbo Boost and have Kitt take to the sky and land on your opponent.

Also comes fully equipped with sounds from KITT and a surprise when you do your taunt! Not only that, but included is a Knight Rider stage... a desert with a purple shade, like the intro of the original series, with a parked F.L.A.G Mobile Unit (semi-truck) with Devon, Bonni and April enjoying the show from the sidelines... not to forget a couple of cars you might recognize driving along the highway!...oh, and has background music too... the ole' Knight Rider theme, but in a more rockin' way!

I am very happy with this mod, as I feel like I have learned what is needed to make a decent character now.
This may be the last new character I work on for a while, as I will be going back to a few older ones to improve them.

Please take Kitt out for a joy ride... and remember, One Mugen Player can make a difference.