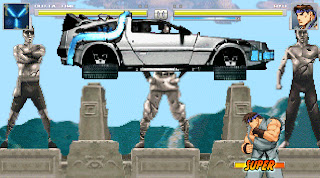 This is an edit of whomever it was who made a Toyota car. I've just swapped sprites to make it the Delorean from BTTF. If I knew how to code I would make it better, but it's a rather shitty char that doesn't do much. I got the idea because the wheels of the original do not turn, so this flying Delorean needs no wheels... not ones that spin anyway.

Update; Aug/24/2012
~ New sounds added.
I wont be updating this character any further. It was an early idea I had, and not worth making into something better like I did with K.I.T.T. Feel free to edit it all you want, if you wish, because if you want updates, they wont be done by me. This character is really not that good at all.
Download