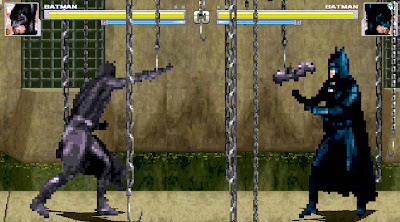 This batman is a sprite swap with someones Lui-Kang character (MK3) the def file does not indicate who made the char, but I do wish I used someone elses now, as this one did has some bugs in it.. or, bad coding I should say.

The sprites are from Batman Forever. It surprises me no one has made this version yet, as the game was very much like controlling a MK character. It was also made by the same guys who made MK. Maybe it was because it was such a shithouse game, not many knew about it?

Like I was saying, the original coding of Lui Kang had some off parts... for one, the block animation blinks unless you are genuinely blocking something... I have no idea how to fix that... do you?
The run for some reason does not work at all. And when doing the super kick (hold k for a few seconds then release) the stance appears above the ground level until you jump around or do a move etc...

Sorry for this not being perfect, I should have really tried out the original character first. But I will get around to having this fixed some day. For now, it's not that bad a character, works like a Mortal Kombatant, but I did not give it finish moves or anything like that.

The sprites look much better as a smaller character, but I enlarged it to MK sized characters... so it looks a little too pix-elated, but what can you do?