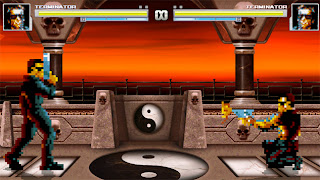 It puzzles me why no one has made a Terminator yet? There is a Arnie looking mod around somewhere, but no one seems to have made the actual Terminator himself... it's probably because of the limited games with decent sprites available. This one comes from Terminator on SNES... due to the lack of sprites, a lot of them are customized by me, as there was only really walking and shooting sprites, so I had to make the rest myself.

It's not the best looking mod, but it is my first attempt at an original character, even tho it does pretty much just sprite swap with KFM. In future if I figure out the projectile shit, his bullets will be visible when he shoots, but for now it's kind of like a long hit with no bullets seen. Be nice to figure out how to make an opponent squirt blood when shot.

This guy does not kick or punch, he just has the one move of firing his guy... like I said, thats all the sprites that where available, so I used what I had and customized what I could.

For now, it's not a great character, but someone out there may want any old T-800 they can get.