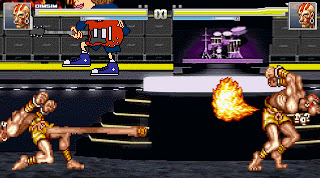 I was bored, so I wasted a few seconds making this edit to Dhalsim. When I first started playing SF2, myself and others, always joked about Dhalsim having a super long penis move or blowing the flame out of his ass... so that's what I did here. Had it been 20 years ago when the whole thing was fresh, it probably would be an awesome edit, but it's 2012, and well, it took me till today to become bored and make that stupid old idea finally come to life and not be able to show it to the people who would have loved it back in 1993 or so.

Whats changed is the strong punch now is an extended dick. Only 2 new sprites where replaced over the original for this. How fucking talented I am, I know!!!😋
I then fiddled with the settings to have Dhalsim face the other way when doing a Yoga Fire or Yoga Flame.. which is now the Yoga Fart I suppose. (sorry, no audio edit to go with it)

As for the name? I dunno, would you prefer DhalSLIM? Go and change it yourself😝